By Phil Hunter, Immediate Past President

Overall, the demand for trees was very solid. Many growers reported receiving calls very early from buyers looking for trees to purchase. As a result of a tight supply, prices once again at the wholesome level caused retailers to increase pricing at the retail lots. Also, the big box stores appeared to have increased pricing, which brought them much closer in price to the small retailers here int he Northwest.

The wholesale harvest this year had almost perfect weather and some reported that it was too nice and too dry. Overall, the trees harvested seemed to have to have come through the drought summer in good condition. Many growers reported sun damage and browning of exterior needles caused by the weather. And, to no surprise, a shortage of labor impacted many growers during the harvest.

Mark Schmidlin of Schmidlin Farms, in Oregon, reported a good wholesale harvest with high demand for additional trees. On the Choose & Cut portion of their operation, sales were strong. Good weather for the first two weeks aided customers of the Choose ^ Cut farms in the area had been cut hard with almost no supply of big trees. Many of the farms surrounding his closed early due to short supply.

A grower who wanted to remain anonymous from Pierce County, Washington, stated:

-Our numbers of trees soldare up 30 percent. Fortunately for us, I have two new fields I opened up, one field of Nordmann and a field of nobles. The new fields are a little immature and I was not going to open them until 2019, but elected to do so because I had to close my order True Fir fields because of limited numbers.
-Our closest in-kind Christmas tree farm (3 miles away) closed on the 9th with very limited inventory.
-Yes, a shortage of big trees. My 13-15 year nobles are sold out. I have only two left in the field. Personally, I won’t miss them or having to use a 15-foot orchard ladder to work them.
-We raise out our prices marginally this year and intend to raise them again in 2019.

On the national level, the Evercore ISI Christmas Tree Survey reports through the first three weeks of the harvest:

– This data is gathered from 24 contacts across the U.S., and includes regional Christmas tree associations, farmers, and retailers who rate sales relative to the same week last year.
-Week 3 saw tree sales pick up across much of the country, as favorable weather helped spur stronger sales. While larger trees continued to be in high demand, sellers also saw garland, swages and wreaths sell well.
-While sellers reported a fairly good start to the 2018 season during weeks 1 and 2, sales in late November and early December were impacted by poor weather resulting in less than ideal selling conditions.
-It should also be noted that in some regions, the recent nor’easters and hurricanes left trees damaged, causing a shortage resulting in retailers closing for the season early to protect their crop for future seasons.

Ken Scholz of Snowshoe Evergreen, in Puyallup, reported that in all his years in the business, he had never seen sales as strong and as early as they were this year. Scholz reported that for the first time ever, they closed the Choose & Cut on december 9.he reported that most of the farms in his area were also sold out and closed early as well. The perfect weather to start the season and talk of the scarcity of trees drove shoppers to the farms early.

Mark Arkills of Holiday Tree Farms Inc. noted that, overall, they saw strong sales this season. In Norther California, they saw the same store daile sales exceed last year’s pace for the last couple of weeks, and recently Southern California experienced the same thing. Arkills expected a very good weekend for the fourth weekend of the season and still more than a week from Christmas. Like all farms, they sold out of  Noble and Nordmann and saw increased demand for Douglas Fir. 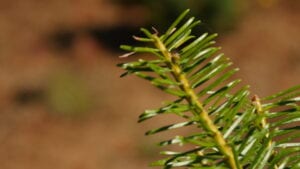